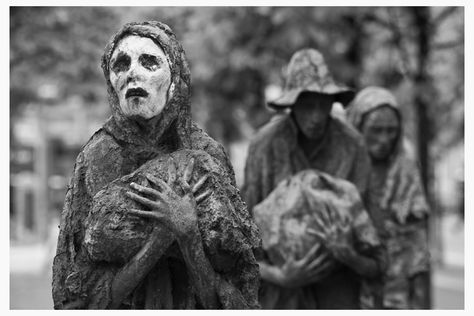 Lets move past the word that the President used, and get to the real topic – why do we want to let people from Africa, Haiti, or other such countries in to the United States? After all, they don’t share our likeness, our values, or our culture, and they might not share our Christian religion. They bring crime, drugs, and worse. This is a huge danger to the American way that we all hold so dear. The very essence of what America means is being threatened by the sh**hole people.

But what does it mean to be an American? Are we a nation of the best people from western Europe – the kinds of people that Trump and his supporters want?

The Colonial founders of the United States were of course largely British. But even they were a mix – of aristocrats and commoners, many of whom came over as indentured servants. And shortly after the founding of the country, immigration of lesser people began. Who were these lesser people? They were the dregs of Britain – the Welsh, Scots, Cornish, or others who were escaping from the crushing poverty of economically depressed (e.g. sh**hole) areas of Britain.

But worse were to come. The 1840’s saw mass migrations of two “subhuman” classes to America – the Irish and the Germans. Both groups were fleeing intolerable sh**hole conditions of poverty, starvation and oppression. Later in the 1800s, other undesirables of racially inferior quality immigrated from sh**hole areas such as Italy and Eastern Europe. Throughout these immigration cycles, each group of newcomers was derided which every bit as much vehemence as the most anti-immigrant Republican politician offers today. But, as there were no laws restricting immigration, (except from China), our ancestors came anyway.

What kind of people were they? Were they the most educated? The richest? the ones who passed the merit tests? Of course not – they were just the opposite. But what they lacked in power and wealth was more than made up for by the qualities they did possess: the energy, bravery, and fortitude to break away from their miserable sh**hole existence  and risk everything for a chance for a better life. It was only the people with those unmatched qualities that could have created the America of today.

So let’s be honest. Most of us are from countries that at the time, were sh**hole places. And America is a Great Nation because of that, not despite it. And if we are to continue in our greatness, we need to continue to encourage those who bring new vitality, new ideas, and new innovation to our land.

We can be ruled by our own fear, and decay into an isolationist, reactionary wasteland, unwilling to change and with our best years behind us. Is this what we want for our children? And for their children?

If we want to continue as the greatest nation on Earth, we need people from sh**hole countries – more than they need us. They are the key to our future. Our past tells us so.